Skateboarder Poppy Olsen is to receive a scholarship from the Sport Australia Hall of Fame. The scholarship is worth over $10,000. It includes one on one mentoring by Layne Beachley, winner of 7 world surfing titles. She also receives a $5000 sporting expenses grant and a return international economy flight. A presentation will be made at an induction and awards gala dinner, held at the Palladium, on Thursday 12th October.

The scholarship will run for a full 12 months and spans the length of 2018.

Poppy is a 17 year old skateboarder from Newcastle and recently won the vert world championships. She’s also won a bronze at the X Games and is on track for making the Australian Olympic team.

What Poppy Olsen had to say..

“The Olympics has always been the dream but I guess to be able to make a living from skateboarding would be the ultimate goal,” Olsen said.

“I guess I am so good at skating because I just love it so much, so I’m always doing it as much as I can.”

“Layne is incredible, it’s going to be awesome to have a mentor that also has a passion for riding a board,”

“I can’t wait to learn from her and hear how she deals with different situations.”

What Layne Beachley had to say..

“Poppy is a skateboarder on a mission and I’m thrilled to be in her corner, mentoring her to become the best athlete she can be,” Beachley said.

“Surfing and skateboarding are on a similar trajectory with inclusion into the Tokyo 2020 Olympic Games so it’s a wonderful opportunity to share my knowledge as a former world champion and current Chair of Surfing Australia with an athlete who has her sights firmly set on fulfilling her potential on the world stage.” 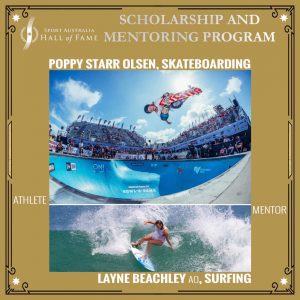